The Geological Curators’ Group is dedicated to supporting the care, maintenance and use of geological collections.

On the 9th October 2019, I attended the GCG’s Geological Fakes Workshop which was held in the National Museum Collection Centre in Edinburgh (the offsite storage for the National Museum of Scotland). The exciting and informative day was split into five different sessions: Minerals, Gems, Meteorites, Amber, and Fossils. My report will cover the first three topics and form Part I of a two part series on the workshop.

Mineral treatments have been known for millennia; Pliny the Elder noted in one of his works how minerals can be enhanced. People might forge minerals for aesthetic, practical or spiritual reasons. Not all fakes are equal, so Rachel used this lovely classification scheme to summarise the different levels of fakery.

Full on fakery includes minerals grown in the lab such as colourful bismuth hopper crystals. Replicas are another type of fake but they do provide great teaching opportunities, especially if the original mineral is too fragile or impractical to handle. During this session, we were shown a model of the impressive Welcome Stranger gold nugget. The original was discovered in 1869 in Australia, and at 71.4 kg, it’s the world’s biggest gold nugget.

Other forgery tactics include using cheaper substitutes (sometimes minerals sold as turquoise are actually dyed howlite), electroplating, and heat treatment. My favourite fake mineral was the “galena geode” which was actually a clay ball filled with crushed galena.

“In the jewellery industry, faking gems can save sellers lots of money at the expense of the customer. Fakes can be enhanced natural gems, substitutes or completely synthetic”.

The lustre of a gem set in a ring or necklace can be enhanced by placing a bit of foil behind it. Sometimes gems such as jadeite, coral or tiger’s eye are bleached to make them lighter. Bleaching can even be done on inclusions inside diamonds. Inclusions can reduce the clarity of diamonds, making them less valuable to jewellers, but this can be ‘rectified’ by drilling into the diamond with a laser and then using acid to bleach the inclusion. Colour can also be altered through irradiation, and heat, and UV exposure can drastically change the colour of amethyst.

Some gems, such as diamond and corundum, can be synthetically grown. Cubic zirconia (ZrO2) is a common synthetic gem and is often used in jewellery due to its low cost, strength and wide range of colours which is achieved by doping with different elements:

Composites are another type of fakery. White opal can be mounted on a black backing to make it look like more expensive black opal. A similar thing is done with emerald where a thin slice of the green gem is sandwiched between colourless synthetic spinel.

“Is this a meteorite or a meteor-wrong?”, was the best tag line ever.

Most meteorites come from the Main Asteroid Belt between Mars and Jupiter, and about 100,000 to 120,000 meteorites with a mass of more than 100g fall to Earth annually. Meteorites have been known to humans for millennia and were used as an alternative to iron ores; ancient Egyptians used daggers and beads made of meteorites, and Inuits have meteorite tipped harpoons. Luckily the tartan-like Widmanstätten patterns in some iron meteorites are (currently) impossible to forge. Sometimes museum workers are asked to identify mystery rocks which people believe to be meteorites. Unfortunately it’s usually just slag or an iron concretion.

At the end of the workshop, we had the chance to visit the mineral and fossil storerooms at the Collection Centre. I ended my little trip to Edinburgh by spending the next day visiting the National Museum of Scotland. 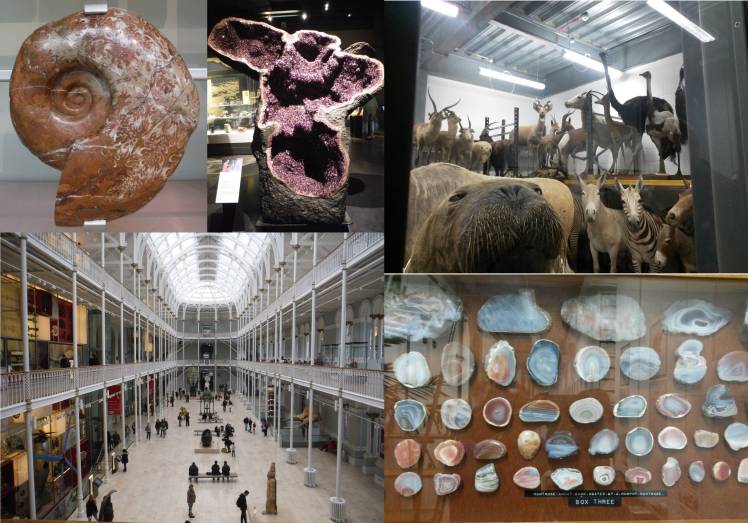